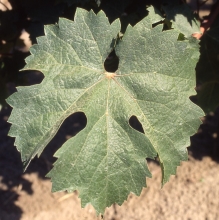 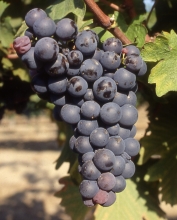 This variety is undoubtedly from the Touraine region and based on published genetic analyses, it is probably a descendant of Gouais blanc.
Synonyms

In France, Grolleau is officially listed in the "Catalogue of vine varieties" on the A list and classified.
Use

The identification is based on:
- the tip of the young shoot with a high density of prostrate hairs,
- the yellow young leaves with bronze spots,
- the shoots with red internodes,
- the large adult leaves, with three or five lobes, an open petiole sinus, large teeth with straight sides, an involute, blistered, sometimes goffered leaf blade, and on the lower side of the leaves, a low density of erect and prostrate hairs,
- the round-shaped berries.
Genetic profile

This fertile variety is susceptible to browning and must be pruned short with a low load. The young shoots are quite sentitive to the wind. This variety has an acceptable production even after spring frost.
Susceptibility to diseases and pests

Grolleau is susceptible to peduncular rot and phomopsis.
Technological potentiality

The bunches and berries are medium in size. Grolleau produces light, not very colored wines with a low alcohol degree. It is especially used for the production of rosé wines (or grey wines) or sparkling wines. It is also used to produce supple and fruity red wines when yields are managed.
Clonal selection in France

A conservatory of more than 200 clones was planted in the Anjou region in 1996.