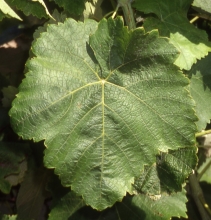 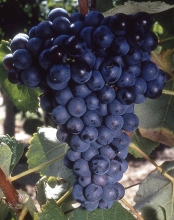 This variety is originally from the Alpes-Maritimes.
Synonyms

In France, this variety can officially be called "Grassenc" regarding plant multiplication material.
Legal information

In France, Grassen is officially listed in the "Catalogue of vine varieties" on the A list and classified.
Use

The identification is based on:
- the tip of the young shoot with a very high density of prostrate hairs,
- the yellow young leaves,
- the circular adult leaves, entire or with three lobes, with a closed petiole sinus with overlapping lobes, medium teeth with convex sides, no anthocyanin coloration of veins, a flat leaf blade, and on the lower side of the leaves, a medium density of erect and prostrate hairs,
- the round-shaped berries.
Genetic profile

Grassen is a fertile variety and a steady producer which must be pruned short. It must be planted in poor and well-exposed soils.
Susceptibility to diseases and pests

The bunches are large to very large in size. Grassen has a low sugar accumulation potential. It produces fine but very little colored wines.
Clonal selection in France

The only certified Grassen clone carries the number 1263.
Bibliographic references