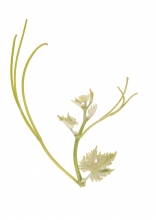 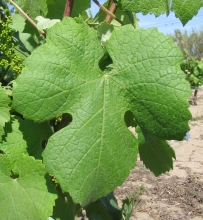 This variety was obtained by Louis and Henri Bouschet in 1855 à Mauguio (Hérault). Based on genetic analyses carried out in Montpellier, Grand noir de la Calmette would result from a crossbreeding between Petit Bouschet (Aramon x Teinturier du Cher) and Morrastel (Graciano).
Synonyms

In France, Grand noir de la Calmette is officially listed in the "Catalogue of vine varieties" since 2013 on the A list and classified. This variety is also listed in the catalogues of other Member States of the European Union: Bulgaria, Portugal and Spain.
Use

The identification is based on:
- the white tip of the young shoot, with a high density of prostate hairs,
- the green or yellow young leaves with a high density of prostate hairs,
- the shoots with red or red-striped internodes,
- the adult leaves with three or five lobes revolute on the edges, deep U-shaped upper lateral sinuses and less pronounced, a slightly open or closed U-shaped petiole sinus, wide teeth, short compared to their width at the base with straight or convex, a weak anthocyanin coloration of veins, a finely blistered flat leaf blade, and on the lower side of the leaves, a medium density of erect and prostate hairs,
- the round-shaped berries whose pulp is colored.
Genetic profile

Grand noir de la Calmette is relatively vigorous, rather fertile and has an erect bearing. Its foliage turns red in fall. This variety is sensitive to winter frosts but not very susceptible to spring frosts as it has a late bud burst. Grand noir de la Calmette is also a little sensitive to drought and its berries tend to shrivel under the effect of water stress.
Susceptibility to diseases and pests

Grand noir de la Calmette is a rather "rustic" variety, it is moderately sensitive to powdery mildew and to wood diseases. It is a little bit more susceptible to downy mildew.
Technological potentiality

Grand noir de la Calmette's bunches are medium in size and moderately compact. The berries are also medium, simple-flavored, with a thick skin and a juicy pulp. The juices are rather colored. The musts of this teinturier variety can be blended for the production of grape juices. This variety gives astringent, not very alcoholic and rather flat wines with sometimes peppery aromas.
Clonal selection in France