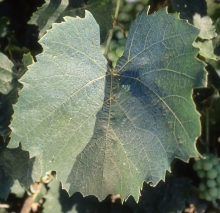 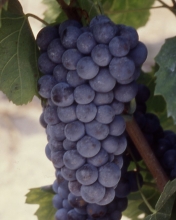 This variety was originally from the center of France, seemingly from the Montluçon region. Based on published genetic analyses, Gouget is probably a descendant of Gouais blanc.
Synonyms

In France, Gouget is officially listed in the "Catalogue of vine varieties" on the A list and classified.
Use

The identification is based on:
- the tip of the young shoot with a low density of prostate hairs,
- the green young leaves with bronze spots,
- the adult leaves, entire or with three lobes, with an open V-shaped petiole sinus, no anthocyanin coloration of veins, an involute leaf blade, and on the lower side of the leaves, a medium density of erect hairs,
- the round-shaped berries.
Genetic profile

This variety is vigorous with an erect bearing and is generally pruned long. Fruit production is good after spring frost.
Susceptibility to diseases and pests

The bunches and berries are small. This variety produces relatively acidic, not very colored and not very tannic wine, with low alchol level.
Clonal selection in France