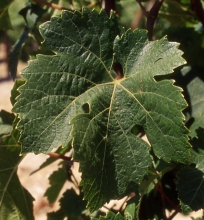 This variety was obtained by C. Oberlin and probably results from a crossbreeding between Riesling and Précoce de Malingre.
Synonyms

In France, Goldriesling is officially listed in the "Catalogue of vine varieties" on the A list and classified. This variety is also listed in the catalogues of other Member States of the European Union: Austria, Denmark and Germany.
Use

The identification is based on:
- the tip of the young shoot with a high density of erect hairs,
- the green young leaves with bronze spots,
- the circular adult leaves, with three or five lobes, U-shaped lateral sinuses, a closed petiole sinus with slightly overlapping lobes, leaving a rounded light, medium teeth with convex or straight sides, a slight anthocyanin coloration of veins, a twisted leaf blade, and on the lower side of the leaves, a medium density of erect hairs,
- the round-shaped or broad ellipsoid berries.
Genetic profile

Goldriesling is not very vigorous. It is a oood producer but rather sensitive to winter frost. Its early budburst also exposes it to spring frosts.
Susceptibility to diseases and pests

Goldriesling is susceptible to downy mildew and grey rot. It is less affected by powdery mildew.
Technological potentiality