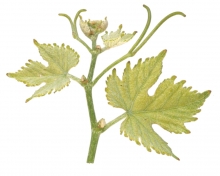 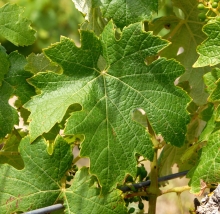 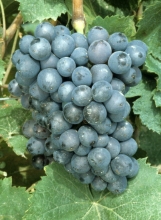 Gibert seems to come from the French department Lot. Based on recent genetic analyses carried out in Montpellier, it would result from the crossbreeding of Cot and Colombaud.
Synonyms

In France, Gibert is officially listed in the "Catalogue of vine varieties" since 2018 on the A list and classified.
Use

Gibert is a vigorous and very productive variety, with a semi-erect bearing. As its bud burst is rather late, this variety is not very affected by spring frosts.
Susceptibility to diseases and pests

Gibert is not very susceptible to downy mildew.
Technological potentiality

Gibert's bunches are medium to large in size and compact. The berries are medium to large, with a simple flavor, a moderately thick skin and a juicy pulp. This variety can be vinified as red or rosé wines. Gibert wines are easy to drink, fresh, ligh, with floral aromas, low alcohol degree and low anthocyanins. They are not suitable for ageing.
Clonal selection in France

There is no certified clone for this variety yet. A conservatory of 5 clones was planted in 2012 at the Departmental Farm of Anglars-Juillac in the French department of Lot.
Bibliographic references