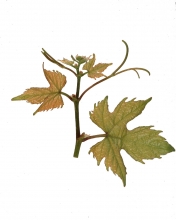 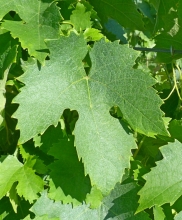 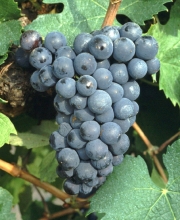 This variety is native to the center of France and based on published genetic analyses, would be the result of the crossbreeding between Gouais blanc and Tressot.
Synonyms

In France, Genouillet is officially listed in the "Catalogue of vine varieties" since 2011 on the A list and classified.
Use

The identification is based on:
- the tip of the young shoot with a low to medium density of prostrate hairs,
- the green young leaves with bronze spots,
- the shoots with red stripes,
- the wedge-shaped or cordate adult leaves, with three or five lobes, deep upper lateral sinuses, a slightly open V-shaped petiole sinus, small to medium teeth with straight sides or with one side convex and one side concave, a weak anthocyanin coloration of veins, an involute, twisted and blistered leaf blade, and on the lower side of the leaves, a low to medium density of erect hairs ans no prostrate hairs,
- the round-shaped or slightly ellipsoid berries.
Genetic profile

Genouillet is moderately vigorous, with a semi-erect bearing, and should preferably be pruned short.
Susceptibility to diseases and pests

Genouillet's bunches are medium in size and compact. The berries are also medium in size. This variety produces fresh, light, colored and pleasant wines.
Clonal selection in France

The only certified Genouillet clone carries the number 1291.
Bibliographic references