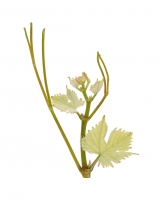 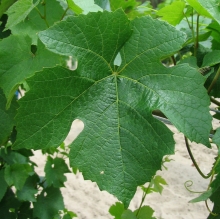 This variety was obtained by INRA and SICAREX Beaujolais in the 1980's and results from the crossbreeding of Gamay and Pinot noir.
Synonyms

In France, Gaminot is officially listed in the "Catalogue of vine varieties" since 2014 on the A list and classified.
Use

Gaminot has a low to medium vigor and a horizontal to semi-erect bearing. It can be pruned short. This variety tends to produce a lot of grappillons.
Susceptibility to diseases and pests

Gaminot is sensitive to downy mildew and powdery mildew. It is however less affected by grey rot.
Technological potentiality

Gaminot's bunches are small and compact. The berries are also small, simple-flavored, sometimes with a slight herbaceous flavor, with a thin skin and a very juicy pulp. This variety produces colored, not very acidic, tannic, fine and balanced wines. Their aromatic profile is close to that of Pinot noir.
Clonal selection in France

The only certified Gaminot clone carries the number 1316.
Bibliographic references