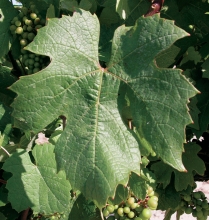 This variety is resulting of a mutation of Gamay.
Synonyms

The identification is based on:
- the slightly bronze young leaves,
- the skin of the berries is practically green up until the veraison period and a colored pulp at maturity.
Genetic profile

The aptitudes of this variety are close to those of other types of teinturier Gamay varieties or Gamay.
Susceptibility to diseases and pests

Gamay de Bouze's behavior towards diseases and pests is the same as that of Gamay.
Technological potentiality

The bunches are small and the berries are small to medium in size. The wines produced are colored (less than Gamay Fréaux but much more than Gamay). They are less fruity than Gamay wines.
Clonal selection in France

The two certified Gamay de Bouze clones carry the numbers 223 and 431. A conservatory with 30 or so clones was planted in 2006 in the wine-growing region of Rhône.
Bibliographic references