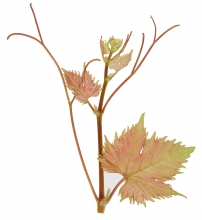 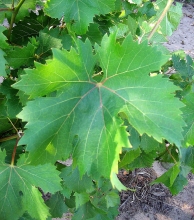 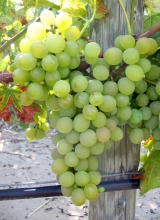 Galibia is an interspecific hybrid obtained by Galibert.
Synonyms

In France, Galibia is officially listed in the "Catalogue of vine varieties" since 2017 on the A list.
Use

The identification is based on:
- the white tip of the young shoot with a low to medium density of prostrate hairs and a piping distribution of anthocyanin coloration,
- the reddish young leaves or with bronze spots,
- the red shoots with internodes presenting a very pronounced ternary rythm (two long then one very short) and with red tendrils,
- the small, circular or wedge-shaped, mate green adult leaves, with five lobes, deep U-shaped lateral sinuses, an open U-shaped petiole sinus, small teeth, long compared to their width at the base with straight or sometimes convex sides, a moderate to strong anthocyanin coloration of veins, a flat, sometimes twisted, finely blistered leaf blade, and on the lower side of the leaves, a medium density of erect hairs,
- the ellipsoid berries with visible veins at maturity.
Genetic profile

Bud burst: same as Chasselas.
Grape maturity: mid-season, 3 weeks and a half after Chasselas.
Suitability for cultivation and agronomic production

Galibia is very fertile but quite weak and has a horizontal to drooping bearing. This variety is not very tolerant to water stress.
Susceptibility to diseases and pests

Galibia is sensitive to vine leafhoppers and to phylloxeric galls. This variety does not seem particularly sensitive to other diseases.
Technological potentiality

The only certified Galibia clone carries the number 1290.
Bibliographic references