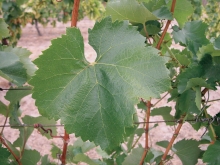 This variety is originally from Hungary. Based on published genetic analyses, Furmint is probably the result of a crossbreeding between Gouais blanc and Alba imputotato.
Synonyms

In the Euopean Union, Furmint is officially called by other names: Kéknyelü (Hungary), Moslavac (Croatia) and Sipon (Slovenia). These synonyms are officially recognized in France regarding plant propagation material.
Legal information

In France, Furmint is officially listed in the "Catalogue of vine varieties" on the A list and classified. This variety is also listed in the catalogues of other Member States of the European Union: Austria, Bulgaria, Croatia, Cyprus, Hungary, Romania, Slovakia and Slovenia.
Use

The identification is based on:
- the tip of the young shoot with a very high density of prostrate hairs,
- the yellow young leaves,
- the wedge-shaped or circulo-kidney-shaped adult leaves, entire or with three lobes, shallow lateral sinuses, an open U-shaped petiole sinus or with slightly overlapping lobes, medium teeth compared to their width at the base with straight or convex sides or with one side convex and one side concave, clearly mucronate, no anthocyanin coloration of veins, a thick, involute and finely blistered leaf blade, and on the lower side of the leaves a high density of erect and prostrate hairs,
- the round-shaped or broad ellipsoid berries.
Genetic profile

Furmint is a moderately to strong vigorous variety with an erect bearing. It must be pruned short. This variety is sometimes susceptible to millerandage.
Susceptibility to diseases and pests

Furmint's bunches are small but the berries are large. The sugar potential of this variety is moderate. Furmint produces full-bodied, powerful wines with high acidity. When this variety is harvested after passerillage (raisining) or in presence of noble rot, extraordinary sweet wines can be produced.
Clonal selection in France

The only certified Furmint clone carries the number 1149.
Bibliographic references