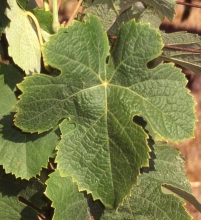 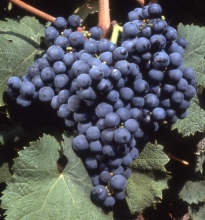 This variety is grown in the Alpes-Maritimes, around Nice.
Synonyms

In France, Fuella nera is officially listed in the "Catalogue of vine varieties" on the A list and classified.
Use

The identification is based on:
- the tip of the young shoot with a very high density of prostate hairs,
- the yellow young leaves with bronze spots,
- the large wedge-shaped or pentagonal adult leaves, with five lobes, an elongated main lobe, a petiole sinus with very overlapping lobes and a fairly frequent tooth on the edge, short teeth compared to their width at the base witg straight sides, a slight anthocyanin coloration of veins, a matte, twisted and blistered leaf blade, and on the lower side of the leaves, a medium density of erect hairs and a high density of prostate hairs,
- the round-shaped berries,
Genetic profile

Fuella nera is vigorous and well adapted to drought. It must be pruned short and planted in well exposed terroirs.
Susceptibility to diseases and pests

Fuella nera is susceptible to powdery mildew and to grey rot.
Technological potentiality

The bunches are large while the berries are small. Fuella nera produces colored, full-bodied, rather fine and aromatic wines with low acidity.
Clonal selection in France

The two certified Fuella nera clones carry the numbers 1073 and 1074. These two clones are originally from the wine-growing region of Bellet (French department of Alpes-Maritimes).
Bibliographic references