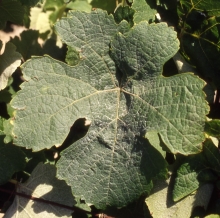 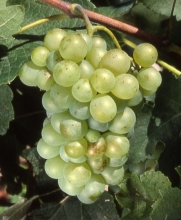 This variety from the west of France is undoubtedly originally from the Charentes region. Based on published genetic analyses, it is probably a descendant of Gouais blanc.
Synonyms

In France, Folle Blanche is officially listed in the "Catalogue of vine varieties" on the A list and classified. This variety is also listed in the catalogues of other Member States of the European Union: Cyprus and Spain.
Use

The identification is based on:
- the tip of the young shoot with a high density of prostrate hairs,
- the adult leaves, with five lobes, deep, open U-shaped lateral sinuses, a closed petiole sinus or with slightly overlapping lobes, short teeth compared to their width at the base with convex sides, a slight to moderate anthocyanin coloration of veins, an involute leaf blade, and the lower of the leaf, a high density of erect hairs and a low density of prostrate hairs,
- the round-shaped berries.
Genetic profile

This variety is fertile, productive and has an erect bearing which allows it to be pruned short with limited training. Folle blanche is quite sensitive to spring frosts due to its early budburst.
Susceptibility to diseases and pests

This variety is very susceptible to grey rot (very compact bunches), black rot and to mites. It is also fairly sensitive to downy mildew and wood diseases.
Technological potentiality

The bunches and berries are medium in size. Folle blanche wines have a low degree of alcohol and are generally nervy and acidic. In southern areas this acidity drops when completely ripe. When not very affected by grey rot, the wines produced can be used to make excellent spirits. Folle blanche also has a good capacity for making base wine.
Clonal selection in France