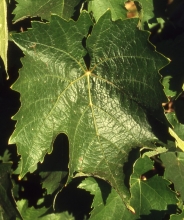 This variety would appear to originally be from the Drôme region. Based on published genetic analyses, Feunate is probably a descendant of Gouais blanc and Pougayen.
Synonyms

In France, Feunate is officially listed in the "Catalogue of vine varieties" on the A list and classified.
Use

The identification is based on:
- the tip of the young shoot with a high density od prostate hairs,
- the green young leaves with bronze spots,
- the shoots with red internodes,
- the adult leaves, entire or with three or five lobes, shallow U-shaped lateral sinuses, with a closed petiole sinus and overlapping lobes, long teeth with straight sides, a slight anthocyanin coloration of veins, a flat leaf blade, involute on the edges, and on the lower side of the leaves, a medium density of prostate hairs,
- the ellipsoid berries.
Genetic profile

Feunate is vigorous, fertile, productive, with an erect bearing and must be pruned short.
Susceptibility to diseases and pests

Feunate does not show any particular sensitivity to downy and powdery mildew, but seems a little sensitive to grey rot.
Technological potentiality

The bunches are medium to large and the berries are large. Feunate produces colorfed wines that are relatively acidic with low alcoholic degree.
Clonal selection in France

The only certified Feunate clone carries the number 1225. Surveys have recently been carried out in the wine-growing region of the French department of Drôme.
Bibliographic references