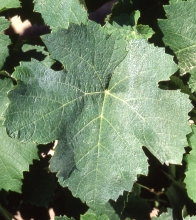 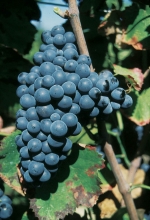 This variety from the south west of France could originally be from the Gironde.
Synonyms

In France, this variety can officially be called "Braucol", "Fer servadou", "Mansois" or "Pinenc" regarding plant propagation material.
Legal information

In France, Fer is officially listed in the "Catalogue of vine varieties" on the A list and classified.
Use

The identification is based on:
- the green young leaves with bronze spots,
- the small or medium adult leaves, with five lobes, shallow lateral sinuses, a slightly open petiole sinus, short teeth, no anthocynanin coloration of veins, a twisted leaf blade, and on the lower side of the leaves, a low density of erect and prostrate hairs,
- the round-shaped berries, with a herbaceous flavor.
Genetic profile

This variety can be irregularly fertile and must be pruned long. Frequently a substantial part of the buds do not burst. The clusters keep well on the vine trunk and have peduncle which lignifies.
Susceptibility to diseases and pests

Fer usually has a good resistance to grey rot. This variety is also not very sensitive to downy mildew, but is it is susceptible to vine leafhoppers.
Technological potentiality

The bunches are medium in size and compact while the berries are small to medium in size. Fer produces lively wines, moderately colored but rather tannic and rustic with typical (wild) aromas. When the grapes have reached maturity, if the yields are managed, Fer's aromas are fruity (blackcurrant, red berries).
Clonal selection in France