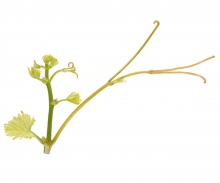 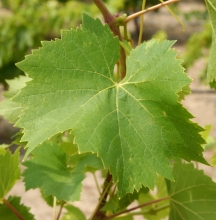 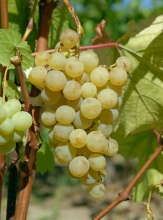 Evita blanche was obtained in Austria by G. Weiss and G. Mayer. This interspecific hybrid results from the crossbreeding of Zala Gyöngye and Perlette.
Synonyms

The identification is based on:
- the tip of the young shoot with a low density of prostrate hairs,
- the shiny, green young leaves with bronze spots and no or a very low density of erect and prostrate hairs,
- the shoots with long tendrils and red internodes on the dorsal side and red-striped internodes on the ventral side,
- the circular or circulo-kidney-shaped, medium-sized adult leaves, entire or with three or five lobes, with a not very open U-shaped petiole sinus, short to medium teeth compared to their width at the base with straight or convex sides, no anthocyanin coloration of veins, a twisted, slightly blistered leaf blade, and on the lower side of the leaves, a very low density of erect and prostrate hairs,
- the slightly ellipsoid berries.
Genetic profile

Evita blanche is a vigorous variety, with a semi-erect bearing, and must be trellised.
Susceptibility to diseases and pests

Evita blanche's bunches are large to very large with a long peduncle. The berries are medium to large, with a slightly aromatic flavor, a moderately thick skin and a firm, crunchy and moderately juicy pulp.
Clonal selection in France