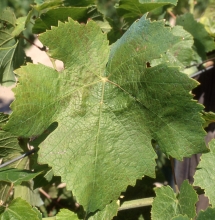 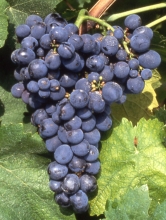 This variety is originally from the Isère region.
Synonyms

In France, Etraire de la Dui is officially listed in the "Catalogue of vine varieties" on the A list and classified.
Use

The identification is based on:
- the tip of the young shoot with a high density of prostrate hairs,
- the green young leaves with bronze spots,
- the large adult leaves, with five lobes, a petiole sinus with slightly overlapping lobes, medium teeth with convex sides, a moderate anthocyanin coloration of veins, a slightly goffered leaf blade, undulate between the veins near the petiole sinus, and on the lower side of the leaves, a low density of erect and prostrate hairs,
- the broad ellipsoid berries.
Genetic profile

This variety is very vigorous, fairly fertile and productive. It can be managed by short pruning. Etraire de la Dui ais quite sensitive to winter frosts. It grows well on deep clay-limestone terroirs and on hillsides. When ripe, it has a tendency to berry shedding.
Susceptibility to diseases and pests

This variety is not very sensitive to powdery mildew.
Technological potentiality

The bunches and berries are medium to large in size. Etraire de la Dui can produce colored, full-bodied and tannic wines (sometimes astrigent) that have good ageing ability.
Clonal selection in France

The only certified Etraire de la Dui clone carries the number 1070. A conservatory of a dozen clones was planted in 1999 in the wine-growing region of Savoie.
Bibliographic references