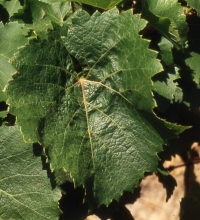 This variety was formerly grown in the north east of France and based on published genetic analyses is probably a descendant of Gouais blanc.
Synonyms

In Austria, Elbling is officially designated as "Weisser Elbling". This synonym is officially recognized in France regarding plant propagation material.
Legal information

In France, Elbling is officially listed in the "Catalogue of vine varieties" on the A list and classified. This variety is also listed in the catalogues of other Member States of the European Union: Germany and Luxembourg.
Use

The identification is based on:
- the tip of the young shoot with a high density of prostrate hairs,,
- the green young leaves with slightly bronze spots,
- the adult leaves with three or five lobes, a V-shaped slightly open petiole sinus, long teeth with straight sides, a moderate anthocyanin coloration of veins, an involute, goffered, blistered leaf blade, folded near the petiole sinus, and on the lower side of the leaves, a low density of erect and prostrate hairs,
- the round-shaped berries.
Genetic profile

Elbling is very vigorous and must be pruned long. It is sensitive to magnesium deficiency.
Susceptibility to diseases and pests

Elbling is susceptible to powdery mildew and grape moths. It is very sensitive to grey rot.
Technological potentiality

The bunches are small and the berries are large. Elbling produces ordinary and acidic wine.
Clonal selection in France