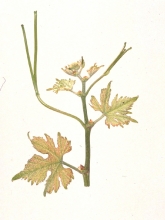 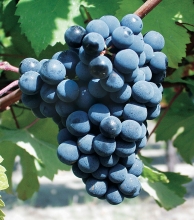 This variety was obtained by INRA in 1955 and is the result of a crossbreeding between Tannat and Cabernet-Sauvignon.
Synonyms

In France, Ekigaïna is officially listed in the "Catalogue of vine varieties" on the A list and classified.
Use

The identification is based on:
- the tip of the young shoot with a medium to high density of prostate hairs,
- the reddish young leaves,
- the pentagonal adult leaves, with five or seven lobes, a slightly open or with slightly overlapping lobes U-shaped petiole sinus, with ofte naked petiole veins, medium teeth with convex sides, a moderate anthocynanin coloration of veins, an involute blistered leaf blade, and on the lower side of the leaves, a medium to high density of erect hairs and a low density of prostate hairs,
- the round-shaped berries.
Genetic profile

This variety is moderately vigorous, with a semi-erect bearing. Ekigaïna must be trained and pruned long.
Susceptibility to diseases and pests

Ekigaïna does not seem to be particularly sensitive to diseases.
Technological potentiality

The cunches and berries are medium in size. Ekigaïna produces colored, balanced, fairly warm and typical wines that are relatively low in acidity.
Clonal selection in France

The only certified Ekigaïna clone carries the number 981.
Bibliographic references