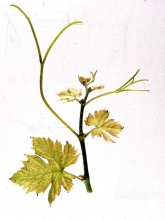 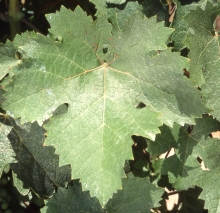 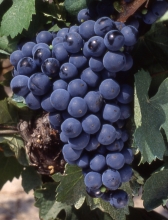 This variety was obtained by INRA in 1954. Based on genetic analyses carried out in Montpellier, this variety would be the result of a crossbreeding between Abouriou and Tinta da Madeira.
Synonyms

The identification is based on:
- the tip of the young shoot with a low to medium density of prostrate hairs,
- the yellow young leaves,
- the circular adult leaves, with five or seven lobes, a petiole sinus with slightly overlapping lobes, frequently with a tooth on the edge, medium teeth with straight or convex sides, an involute leaf blade, and on the lower side of the blade, a medium density of erect hairs,
- the round-shaped berries
Genetic profile

Bud burst: 3 days before Chasselas.
Grape maturity: early-season, 1 week and a half after Chasselas.
Suitability for cultivation and agronomic production

Egiodola is early, fertile, with moderate to strong vigor. This variety can produce a high and steady production. Pruning should be moderate in order to limit yields.
Susceptibility to diseases and pests

Egiodola is not very sensitive to grey rot.
Technological potentiality

The bunches and berries are medium in size. Egiodola can produce very colored, generous and tannic wines.
Clonal selection in France

The only certified Egiodola clone carries the number 600.
Bibliographic references