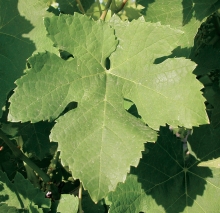 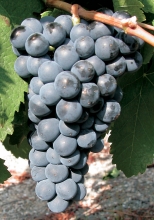 This variety was developed by Mr Durif, and is the result of the crossbreeding between Syrah and Peloursin.
Synonyms

In France, Durif is officially listed in the "Catalogue of vine varieties" on the A list and classified.
Use

The identification is based on:
- the tip of the young shoot with a medium density of prostrate hairs,
- the yellow or green young leaves,
- the end of the woody shoots that are sometimes fasciated,
- the circular dark green adult leaves, with five lobes, very deep open club-shaped lateral sinuses, an open U-shaped petiole sinus, small teeth with convex sides, no anthocynanin coloration of veins, a finely blistered leaf blade, sometimes folded near the petiole sinus, and on the lower side of the leaves, no or a very low density of erect and prostrate hairs,
- the round-shaped or broad ellipsoid berries.
Genetic profile

Durif has low to moderate vigor with a semi-erect to horizontal bearing. Rather fertile, it can be pruned short. The berries are sensitive to heat and shrivelling. This variety is also sensitive to winter frosts.
Susceptibility to diseases and pests

Durif is sensitive to wood diseases, grey rot and black rot, but is not very susceptible to downy mildew.
Technological potentiality

Durif's bunches and berries are medium in size. The sugar potential of this variety is average. Durif has the capacity to make colored, fairly tannic and astringent, but not very fruity wines.
Clonal selection in France

The only certified Durif clone carries the number 1130.
Bibliographic references