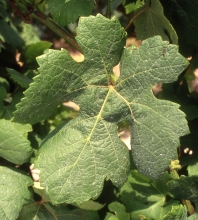 This variety is originally from the Gaillac or Ariège region. Based on genetic analysis carried out in Montpellier, it would be the result of the crossbreeding between Savagnin and Tressot.
Synonyms

In France, Duras is officially listed in the "Catalogue of vine varieties" on the A list and classified.
Use

The identification is based on:
- the tip of the young shoot with a high density of prostrate hairs,
- the yellow young leaves,
- the circular adult leaves, with five, seven or nine lobes, very deep U-shaped lateral sinuses with frequently a tooth inside, sometimes naked petiole veins, a moderate anthocyanin coloration of veins, a twisted revolute leaf blade, and on the lower side of the leaves, a low density of erect and prostrate hairs,
- the round-shaped berries.
Genetic profile

This variety displays good fertility and must be ideally pruned short. Duras wood is hard and has a erect bearing.
Susceptibility to diseases and pests

The bunches are medium to large and the berries are medium in size. Duras has a good sugar accumulation potential. Wines obtained are moderately colored but very distinctive (peppery).
Clonal selection in France

The four certified Duras clones carry the numbers 554, 555, 627 and 654. More than 120 clones are conserved since 1998 in the wine-growing region of Gaillac (French department of Tarn).
Bibliographic references