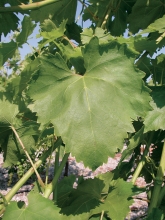 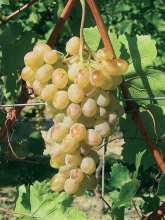 This table grape variety is of natural origin and is found in many countries.
Synonyms

In France, Dattier de Beyrouth is officially listed in the "Catalogue of vine varieties" on the A list. This variety is also listed in the catalogues of other Member States of the European Union: Bulgaria, Croatia, Greece, Hungary, Portugal, Romania and Spain.
Use

The identification is based on:
- the tip of the young shoot with a low density of prostate hairs,
- the green young leaves with bronze spots,
- the shoots that have long internodes,
- the circular, small to moderate adult leaves, with three or five lobes, an open U-shaped petiole sinus with parallel edges and often naked petiole veins, small to medium teeth with straight sides, no or a weak anthocyanin coloration of veins, a smooth shiny leaf blade, and on the lower side of the leaves, no erect and prostate hairs,
- the narrow ellipsoid or cylindric berries.
Genetic profile

Dattier de Beyrouth is a vigorous variety with a semi-erect to horizontal bearing. It can be managed by short or long pruning but it must be carefully trained because the shoot base is fragile in the spring and the shoots are sensitive to the wind. Dattier de Beyrouth is also susceptible to coulure and millerandage.
Susceptibility to diseases and pests

Dattier de Beyrouth is very susceptible to downy mildew and phomopsis. It is also sensitive to grey rot.
Technological potentiality

The bunches are very large, loose or moderately compact. The berries are very large, simple-flavored, with a thick skin and a fleshy pulp. This variety has a good storage and transport capacity.
Clonal selection in France