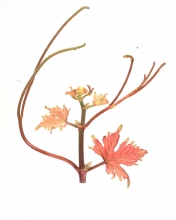 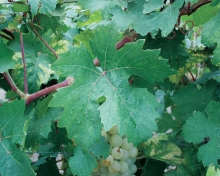 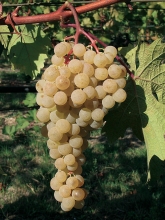 This variety was obtained in 1958 by INRA by crossbreeding Dabouki and Chasselas.
Synonyms

In France, Danlas is officially listed in the "Catalogue of vine varieties" on the A list. It is classified as a wine grape variety only in some French department (see the regulations in force). This variety is also listed in the catalogue of Portugal.
Use

Identification signs include:
- the tip of the young shoot with a medium density of prostate hairs,
- the reddish young leaves,
- the shoots with a strong anthocyanin pigmentation of the nodes and the internodes,
- the pentagonal adult leaves, with five or seven lobes, a slightly open or closed V-shaped petiole sinus with slightly overlapping lobes, large teeth, medium compared to their width at the base with straight sides, a moderate to strong anthocyanin pigmentation of veins, a twisted, moderately blistered leaf blade, and on the lower side of the leaves, a low density of erect hairs and no or a very low density of prostate hairs,
- the round-shaped berries.
Genetic profile

Danlas displays strong vigor and a horizontal bearing. As it is sensitive to the wind, it must be trained and pruned long. It is not very susceptible to millerandage and coulure.
Susceptibility to diseases and pests

Danlas is very susceptible to phomopsis, downy and powdery mildew. On the other hand, it is not very sensitive to grey rot.
Technological potentiality

Danlas's bunches are large, moderately compact with a long and pigmented peduncle. The clusters are homogeneous, easy to pick and to package. The berries are medium to large in size. The skin is thick and the pulp relatively juicy, soft with a neutral flavor. Danlas has a good storage and transport capacity. When vinified, Danlas produces ordinary and not very aromatic wines.
Clonal selection in France

The only certified Danlas clone carries the number 499.
Bibliographic references