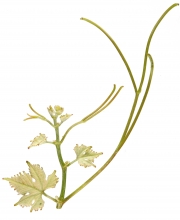 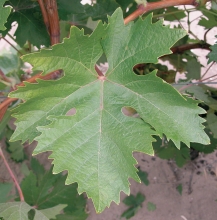 This table grape variety of natural origin is wide spread throughout the Middle East.
Synonyms

In France, Dabouki is officially listed in the "Catalogue of vine varieties" on the A list. This variety is also listed in the catalogues of other Member States of the European Union: Spain and Portugal.
Use

The identification is based on:
- the tip of the young shoot with a high density of prostrate hairs,
- the young leaves that are bronze or reddish,
- the large circular adult leaves, with five, seven or more than seven lobes, U or club-shaped lateral sinuses, a slightly open or close U-shaped petiole sinus, large teeth, medium length compared to their width at the base with straight or convex sides, a strong anthocyanin coloration of veins, a strongly blistered involute leaf blade, and on the lower side of the leaves, a medium to high density of erect and prostrate hairs,
- the ellipsoid berries.
Genetic profile

Dabouki is a vigorous variety with a horizontal bearing. Its production potential is average. It can be managed with short or moderate long pruning. Dabouki resists well against drought and is not very affected by coulure and millerandage.
Susceptibility to diseases and pests

The bunches are large to very large and moderately compact. The berries are also very large, simple-flavored, with a thick skin and a fleshy pulp. This variety has a good storage and transport capacity.
Clonal selection in France

The only certified Dabouki clone carries the number 1103.
Bibliographic references