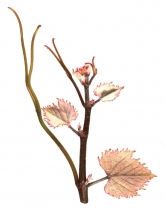 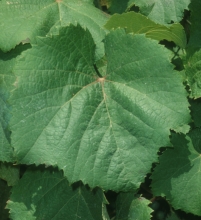 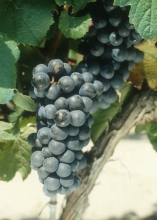 This variety is originally from the south west of France. Based on genetic analysis carried out in Montpellier, it would be the result of the crossbreeding between Magdeleine noire des Charentes and Prunelard.
Synonyms

In France, this variety can officially be called "Malbec" regarding plant propogating material. In the European Union, Cot is officially called by other names: Malbec (Spain, Czech Republic), Malbech (Italy) and Malbek (Austria).
Legal information

In France, Cot is officially listed in the "Catalogue of vine varieties" on the A list and classified. This variety is also listed in the catalogues of other Member States of the European Union: Austria, Bulgaria, Czech Republic, Italy and Spain.
Use

The identification is based on:
- the tip of the young shoot, with a high density of prostrate hairs,
- the green young leaves with bronze spots,
- the adult leaves, entire or with three lobes, with a U or V-shaped open petiole sinus, small teeth, long compared to their width at the base with straight sides, a revolute leaf blade, undulate between the veins near the petiole sinus, and on the lower side of the leaves, a low to medium density of prostrate hairs,
- the round-shaped berries
Genetic profile

Bud burst: 4 days after Chasselas.
Grape maturity: mid-season, 2 weeks and a half after Chasselas
Suitability for cultivation and agronomic production

This vigorous variety is sensitive to coulure, but clonal selection has greatly reduced this defect. Plant vigor should be managed by high density plantations and by using low-productive rootstock. This variety is fairly sensitive to winter frosts during the first years after plantation. Following spring frosts, the shoots from secondary buds are not very fertile. At maturity, there is sometimes the risk of berry shedding.
Susceptibility to diseases and pests

Cot does not seem particularly sensitive to fungal diseases except perhaps to phomopsis. It is also senstive to vine leafhoppers.
Technological potentiality

The bunches and berries are medium in size. With a well-managed production, this early variety can produce quite colored, aromatic and tannic wines with good ageing capacity. Rosé wine-making also gives good results. Generally speaking, sufficient maturity of grapes must be reached to avoid herbaceous and vegetal aromas of Cot to be too present, which can sometimes be hard and bitter.
Clonal selection in France