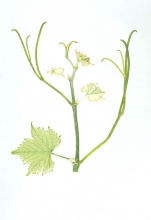 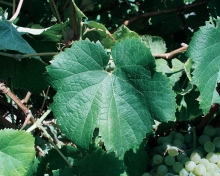 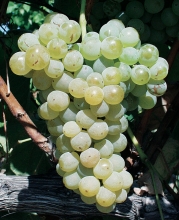 In France, Claverie is officially listed in the "Catalogue of vine varieties" on the A list and classified.
Use

with base of petiole sinus tissue often absent
- the tip of the young shoot with a very high density of prostrate hairs,
- the green or yellow young leaves,
- the dark green circular adult leaves, with three or five lobes, a closed petiole sinus with often naked petiole veins, small teeth, medium to long compared to their width at the base with straight sides, no anthocyanin coloration of veins, a twisted, goffered and blistered leaf blade, and in the lower side of the leaves, a medium to high density of prostrate hairs,
- the broad ellipsoid berries.
Genetic profile

Claverie is a vigorous variety, but not very fertile when pruned short.
Susceptibility to diseases and pests

The bunches are large and the berries are medium to large in size. Claverie produces light, fairly neutral, moderately alcoholic and relatevely acidic wines.
Clonal selection in France

The only certified Claverie clone carries the number 1116. A conservatory of 45 clones was planted in 2003 in the Landes region.
Bibliographic references