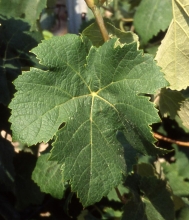 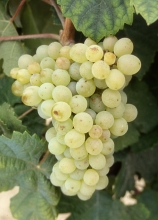 This variety is originally from Provence.
Synonyms

In France, Clairette is officially listed in the "Catalogue of vine varieties" on the A list and classified. This variety is alsoy listed in the catalogues of other Member States of the European Union: Cyprus and Italy.
Use

The identification is based on:
- the tip of the young shoot with a very high density of prostrate hairs,
- the yellow young leaves,
- the circular adult leaves, with five lobes, deep lateral sinuses, a closed petiole sinus with very overlapping lobes, teeth with straight sides, low to medium anthocyanin coloration of veins, a slightly goffered leaf blade, undulate between the veins near the petiole sinus, and on the lower side of the leaves, a high density of prostrate hairs,
- the ellipsoid berries.
Genetic profile

Clairette is a vigorous grape variety, which must be pruned short. Better yields are achieved on limestone, not fertile, lean and dry soils. Careful disbudding is needed. It has a semi-erect bearing and its shoots are a little susceptible to wind. At maturity, the peducunle of bunches lignifies.
Susceptibility to diseases and pests

This variety is susceptible to grape moths and mites. On the other hand, Clairette is relatively less sensitive to powdery mildew and grey rot.
Technological potentiality

The bunches and berries are medium in size. Clairette gives fairly alcoholic wines (and sometimes sweet with raisining or over-maturation), relatively low in acidity, with noticeable aromas (apple) and sometimes presenting a light harshness or bitterness on the finish. This variety can also be used to make sparkling wine.
Clonal selection in France