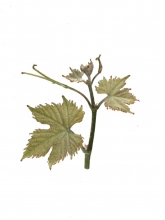 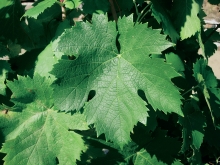 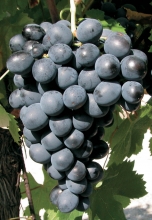 This southern variety would appear to originally be from Provence.
Synonyms

In France, this variety can officially be called "Cinsault" regarding plant propagation material. In Italy, Cinsaut is officially designated as "Ottavianello".
Legal information

In France, Cinsaut is officially listed in the "Catalogue of vine varieties" on the A list and classified. This variety is also listed in the catalogues of other Member States of the European Union: Bulgaria, Cyprus, Greece, Italy and Portugal
Use

The identification is based on:
- the tip of the young shoot with a high density of prostate hairs,
- the circular adult leaves, with five lobes, fairly deep V-shaped lateral sinuses, a slightly open or closed petiole sinus, long teeth compared to their width at the base with straight sides or with one side concave and one side convex, a slightly involute leaf blade, particularly the main lobe, and on the lower side of the leaves, a low density of prostate hairs and a medium density of erect hairs,
- the ellipsoid berries.
Genetic profile

This grape variety is fertile, productive, very drought resistant and not very susceptible to browning. Under fertile conditions, yields are too high and the products obtained are then of low quality. Cinsaut should preferably be grown on poor and dry soils. Under such conditions, steady production can be achieved. It's a not a very vigorous vine (small wood diameter), with drooping branches that must be pruned short. It tends to to produce many off shoots and suckers and it must be carefully disbudded. The aging of vine stock is fairly quick. In a limestone area and in the spring, Cinsaut may easily show signs of chlorosis.
Susceptibility to diseases and pests

The bunches are large and the berries very large. Juice yield is very high. On good, low fertile terroirs (schist for exampke) with low yields, it is possible for this variety to obtain, fruity, sometimes spicy, pleasant and supple wines, and particularly excellent rosés.
Clonal selection in France