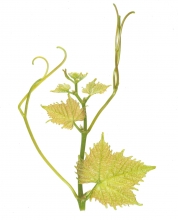 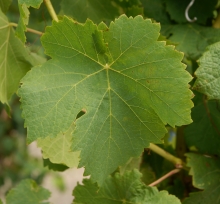 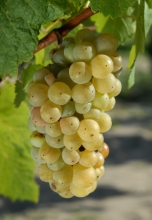 This variety is native to the Loire region. Based on genetic analyses carried out in Montpellier, il would be closely related to Mondeuse blanche.
Synonyms

In France, Chouchillon is officially listed in the "Catalogue of vine varieties" since 2016 on the A list and classified.
Use

The identification is based on:
- the tip of the young shoot with a low to medium density of prostrate hairs and a piping distribution of anthocyanin coloration,
- the young leaves with bronze spots and a low density of prostrate hairs,
- the shoots with green or sometimes red-striped internodes,
- the pentagonal, light green adult leaves, with three or five lobes, rather deep upper lateral sinuses, a closed V-shaped petiole sinus or with slightly overlapping lobes, short teeth compared to their width at the base with convex sides, no anthocyanin coloration of veins, a twisted, blistered leaf blade, and on the lower side of the leaves, no or a very low density of erect and prostrate hairs,
- the round-shaped berries.
Genetic profile

Bud burst: 3 days before Chasselas.
Grape maturity: mid-season, 2 weeks and a half to 3 weeks after Chasselas.
Suitability for cultivation and agronomic production

Chouchillon is vigorous and has a semi-erect bearing. This variety does not seem too sensitive to drought. As its basal buds are moderately fertile, it is best to prune it long.
Susceptibility to diseases and pests

Chouchillon does not seem particularly sensitive to downy mildew and powdery mildew. It is however a little more susceptible to phomopsis and grey rot.
Technological potentiality

Chouchillon’s bunches are medium in size and compact. The berries are also medium, simple-flavored, with a moderately thick skin and a juicy pulp. The wines are pale yellow with green tints. On the nose, they are rather complex, with floral aromas and exotic and citrus fruits notes.
Clonal selection in France

The only certified Chouchillon clone carries the number 1287.
Bibliographic references