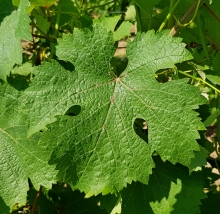 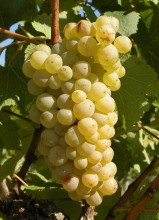 This variety is originally from the Loire Valley and seemingly from Anjou.
Synonyms

In Bulagria, Chenin is officially designated as "Shanin". This synonym is officially recognized in France regarding plant propagation material.
Legal information

In France, Chenin is officially listed in the "Catalogue of vine varieties" on the A list and classified. This variety is also listed in the catalogues of other Member States of the European Union: Belgium, Bulgaria, Cyprus, Czech Republic, Italy, Malta, Portugal and Spain.
Use

The identification is based on:
- the tip of the young shoot with a very high density of prostrate hairs,
- the young leaves with bronze spots,
- the adult leaves, with three or five lobes, a slightly open petiole sinus or with slightly overlapping lobes, medium teeth with convex sides, a strong anthocyanin coloration of veins, a blistered leaf blade, and on the lower side of the leaves, a medium density of prostrate hairs,
- the ellipsoid berries.
Genetic profile

Bud burst: 1 day before Chasselas.
Grape maturity: mid-season, 3 weeks to 3 weeks and a half after Chasselas.
Suitability for cultivation and agronomic production

Chenin is a vigorous and fertile variety whose production potential depends a lot on agronomic soil fertility where it is grown. It is susceptible to heat. Budburst is early. After a spring frost, the secondary buds demonstrate very low fertility.
Susceptibility to diseases and pests

The bunches are medium to large and the berries are small to medium in size. Depending on the growing conditions and the terroirs (limestone, schists) this variety can be used to produce sparkling wines, white wines, or liqueur wines. Acidity potential is high and the wines produced are elegant, generally quite lively, with aromas of honey.
Clonal selection in France

More than 300 clones are planted in a conservatory in the wine-growing region of Anjou since 1996. An other conservatory-collection of fiften or so clones was planted in the French department of Aveyron in 1995.