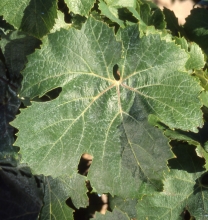 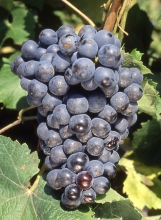 This variety was obtained in 1958 by INRA by crossbreeding Grenache and Jurançon.
Synonyms

In France, Chenanson is officially listed in the "Catalogue of vine varieties" on the A list and classified.
Use

The identification is based on:
- the tip of the young shoot with a high density of prostrate hairs,
- the yellow or green young leaves,
- the shoots with red internodes,
- the circular adult leaves, with five lobes, an open U-shaped petiole sinus, short to medium teeth compared to their width at the base with straight sides, no anthocyanin coloration, and on the lower side of the leaves, a medium density of erect and prostrate hairs,
- the round-shaped berries.
Genetic profile

Chenanson is a very fertile variety which must be pruned short. This variety can be trained in gobelet and is adapted to hot and dry terroirs. Production needs to be managed, especially in the first years, since browning and dessication of the stems symptoms may appear (especially with SO4).
Susceptibility to diseases and pests

Chenanson is not very susceptible to grey rot.
Technological potentiality

The bunches are large and the berries are small. This variety produces supple, fruity, generous and distinctive wines.
Clonal selection in France

The only certified Chenanson clone carries the number 602.
Bibliographic references