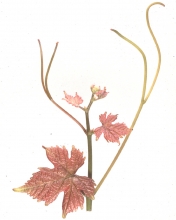 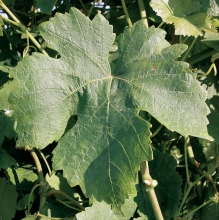 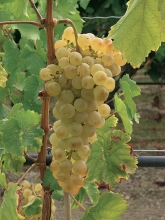 This variety would seem to originally be from Burgundy or from Switzerland.
Synonyms

In France, Chasselas is oficially listed in the "Catalogue of vine varieties" on the A list. It is classified as a wine grape variety only in some French department (see the regulations in force). This variety is also listed in the catalogues of other Member States of the European Union: Belgium, Bulgaria, Hungary, Italy, Portugal, Romania, Slovenia and Spain.
Use

The identification is based on:
- the tip of the young shoot with a low to medium density of prostrate hairs,
- the reddish young leaves,
- the shoots with very long tendrils,
- the light green pentagonal adult leaves, with five lobes, a slightly open petiole sinus, short to medium teeth compared to their width at the base with convex sides, and on the lower side of the leaves, a medium density of erect hairs,
- the round-shaped berries.
Genetic profile

This variety can be managed with short or long pruning. Depending on climatic conditions, it is sometimes susceptible to millerandage. It is also rather susceptible to magnesium deficiency (especially in potassium-rich soils) and to dessication of the stems.
Susceptibility to diseases and pests

Chasselas is not very susceptible to grey rot and mites. On the other hand, it is sensitive to powdery mildew, phomopsis and eutypa dieback.
Technological potentiality

The bunches and berries are medium in size. The skin is thin, the pulp is soft and juicy with a pleasant taste. Chasselas has a good storage and transport capacity. Wines produced from Chasselas are rather fine, but often rather neutral in terms of aromatic potential and sometimes lack acidity.
Clonal selection in France