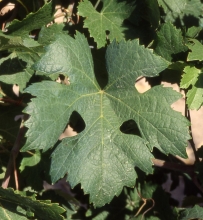 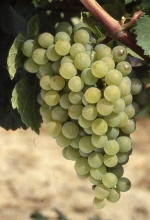 This variety was obtained by INRA in 1958. Based on genetic analyses carried out in Montpellier, this variety would be the result of the crossbreeding between Listan and Pinot.
Synonyms

The identification is based on:
- the tip of the young shoot with a low or very density of prostrate hairs,
- the yellow young leaves,
- the shoots with red internodes,
- the circular adult leaves, with seven or more lobes, U-shaped deep lateral sinuses, an open petiole sinus, medium teeth with straight sides, no anthocyanin coloration of veins, and on the lower side of the leaves, a medium density of erect hairs,
- the round-shaped berries.
Genetic profile

Chasan must be trellised and pruned short due to it being a fertile and productive variety which grows long branches with a drooping bearing.
Susceptibility to diseases and pests

This early variety resists very well to grey rot but is susceptible to phomopsis, powdery mildew and to a lesser extent to downy mildew and mites.
Technological potentiality

The bunches are very large and the berries are medium in size. Chasan produces aromatic products that are sensitive to oxidation. This variety is well suited to cool areas as acidity drops quickly during maturation and often reaches very low levels in southern regions.
Clonal selection in France

The only certified Chasan clone carries the number 538.
Bibliographic references