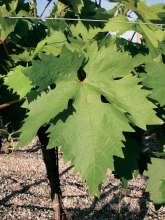 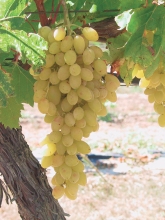 This variety was obtained in 1966 by Harold P. Olmo (California) by crossbredding Gold and Q 25-6 (F2 Emperor x Sultana moscata B).
Synonyms

In France, Centennial seedless is officially listed in the "Catalogue of vine varieties" on the A list and classified. This variety is also listed in the catalogues of other Member States of the European Union: Spain, Italy and Portugal
Use

The identification is based on:
- the tip of the young shoot with a low to meidum density of prostrate hairs,
- the reddish young leaves,
- the wedge-shaped or circular adult leaves, with five, seven or more than seven lobes, a slightly open U-shaped petiole sinus, large and long teeth compared to their width at the base with straight sides, a moderate to strong anthocyanin coloration of veins, an involute leaf blade, and on the lower side of the leaves, no or a very low density of prostrate hairs and a low density of erect hairs,
- the narrow ellipsoid or occasionally curved berries, with a simple or slightly aromatic (muscat) flavor.
Genetic profile

Centennial seedless is very vigorous and has a semi-erect to horizontally bearing. It must be trellised and pruned long.
Susceptibility to diseases and pests

Centennial seedless's bunches are large to very large and moderately compact. The berries are seedless, large, with a fairly thin skin, a firm pulp and a very pleasant flavor. Leaf removal must be moderate as the berries are a little sensitive to browning. Under certain conditions, after harvest, the stalks shrivel quickly and the berries have a tendency to fall off. The grapes have a moderate storage and transport capacity.
Clonal selection in France