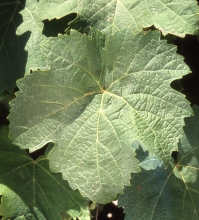 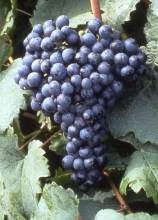 This variety is from the south west of France (more specifically from the right bank of the Garonne valley) and could originally be from Gironde (the area around Saint-Macaire). Based on genetic analyses carried out in Montpellier, it would be the result of the crossbreeding between Gros Cabernet and Camaraou noir.
Synonyms

In France, Castets is officially listed in the "Catalogue of vine varieties" on the A list and classified.
Use

The identification is based on:
- the very bronzed and orange-colored young leaves,
- the adult leaves with a V-shaped open petiole sinus, fairly shallow lateral sinuses, medium length teeth compared to their width at the base with convex sides, a shiny very blistered leaf blade, and on the lower side of the leaves, a low density of erect and prostate hairs,
- the round-shaped berries, with herbaceous flavor.
Genetic profile

Castets is vigorous, not very fertile which must be pruned long. Bud burst is very late and it has an erect bearing.
Susceptibility to diseases and pests

This variety is a little sensitive to grey rot and especially powdery mildew. It is not very affected by downy mildew.
Technological potentiality

The bunches are medium to large in size and the berries are small. This variety produces wines that can be aged, very colored, relatively alcoholic but not very acidic.
Clonal selection in France

The only certified Castets clone carries the number 1126.
Bibliographic references