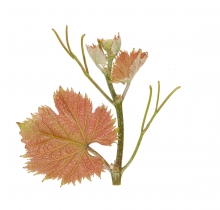 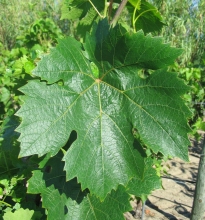 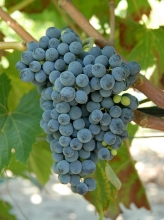 Carubis is an interspecific hybrid obtained by Galibert. Based on genetic analyses carried out in Montpellier, it would result from the crossbreeding of Villard blanc (12375 Seyve-Villard) and Carignan.
Synonyms

In France, Carubis is officially listed in the "Catalogue of vine varieties" since 2017 on the A list.
Use

Carubis is very vigorous and has a horizontal or semi-erect bearing. This variety can show symptoms of magnesium deficiency and can be affected by coulure.
Susceptibility to diseases and pests

Carubis is sensitive to downy mildew and to vine leafhoppers. It is however not very susceptible to bud mite disease.
Technological potentiality

Carubis' bunches are large, moderately or not very compact. The berries are medium in size, simple-flavored, with a thick skin and a juicy pulp. The juices are rich in polyphenols and have an intense color.
Clonal selection in France

The only certified Carubis clone carries the number 1245.
Bibliographic references