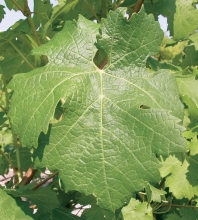 This variety is originally from the Bordeaux vineyards. Based on genetic analyses carried out in Montpellier, it would be a descendant of Cabernet franc.
Synonyms

In France, Carmenère is officially listed in the "Catalogue of vine varieties" on the A list and classified. This variety is also listed in the catalogues of other Member States of the European Union: Bulgaria, Malta and Italy.
Use

The identification is based on:
- the tip of the young shoot with a high density of prostrate hairs,
- the shiny young leaves, that are revolute and red-orange with bronze spots,
- the stamen filaments are crumpled during flowering,
- the shiny circular adult leaves, with five lobes, lateral sinuses with often a tooth inside, a slightly overlapping petiole sinus, medium teeth with straight sides, slight anthocyanin coloration of veins, a revolute leaf blade, and on the lower side of the leaves, a low density of erect and prostrate hairs,
- the round-shaped berries.
Genetic profile

Carmenère is vigorous, not very fertile on basal buds, and must therefore be pruned long. This grape variety can be very susceptible to coulure if weather conditions are bad during flowering.
Susceptibility to diseases and pests

Carmenère does not seem particularly susceptible to diseases.
Technological potentiality

The bunches are small and the berries are medium in size. Carmenère produces fairly rich, very colored, tannic (sometimes with some bitterness) wines, but often they are lacking acidity. In terms of aroma, the herbaceous flavor dominates, unless if a proper maturity is reached.
Clonal selection in France

The two certified Carmenère clones carry the numbers 1059 and 1235. A conservatory of 3 clones was planted in the Bordeaux wine-growing region between 2011 and 2012.
Bibliographic references