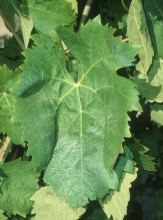 This variety is of Spanish origin (probably from the Aragon region).
Synonyms

In Spain, Carignan is officially designated as "Mazuela". This synonym is officially recognized in France regarding plant propagation material.
Legal information

In France, Carignan is officially listed in the "Catalogue of Vine varieties" on the A list and classified. This variety is also listed in the catalogues of other Member States of the European Union: Bulgaria, Cyprus, Greece, Malta, Portugal and Spain.
Use

The identification is based on:
- the tip of the young shoot with a high density of prostate hairs,
- the shiny yellow young leaves,
- the shoots with red striped internodes,
- the large adult leaves, with five lobes, shallow to deep lateral sinuses, a slightly open or closed petiole sinus, a twisted very goffered leaf blade, on and the lower side of the leaves, a low density of prostate hairs,
- the round-shaped or broad ellipsoid berries.
Genetic profile

Carignan has an erect bearing. This is a fertile variety which has a steady and often substantial production. It is easily trained and must be pruned short (gobelet, cordon). Carignan is well adapted to hot and dry areas, with fairly poor soil (shale for example). It also appears well adapted to windy areas. In terms of mineral absorption, Carignan is sometimes susceptible to potassium deficiency.
Susceptibility to diseases and pests

This variety is relatively unaffected by grey rot and is very little susceptible to phomopsis. On the other hand, its tremendous susceptibility to powdery mildew on the leaves and bunches is well known. It is also sensitive to vine leafhoppers.
Technological potentiality

The bunches and berries are medium to large in size. Carignan has a moderate potential for sugar content and high color potential. The tannins are however harsh, herbaceous, bitter and the wines produced lack fruit and suppleness. These charactertistics can be favorably corrected using carbonic maceration. This is oftentimes linked to the age of the vines, the production conditions and the terroir. Indeed, in poor fertile conditions, in good terroirs, with adult vines and limited production, the wines obtained can be powerful and generous.
Clonal selection in France