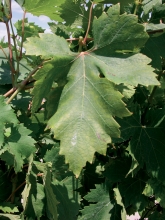 This variety was obtained by E. Snyder and F. Harmon in California. Based on genetic analyses carried out in Montpellier, this variety would be be the result of the crossbreeding between Reine des vignes and Alphonse Lavallée.
Synonyms

The identification is based on:
- the tip of the young shoot with no or very little prostrate hairs,
- the young leaves are reddish or green with bronze spots,
- the shoots have very long internodes and very long tendrils,
- the wedge-shaped adult leaves, with five lobes, an open U-shaped or brace-shaped petiole sinus, medium teeth compared to their width at the base with straight or convex sides, slight or moderate anthocyanin coloration of veins, a smooth shiny leaf blade, and on the lower side of the leaves, no or a very low density of erect and prostrate hairs,
- the round-shaped or slightly bumpy berries, often containing 6 pips.
Genetic profile

Cardinal has a strong vigor and a horizontal bearing. It can be pruned short and must be trained. It is susceptible to millerandage and coulure. Its berries are susceptible to bursting.
Susceptibility to diseases and pests

Cardinal is suceptible to the phomopsis and to downy mildew.
Technological potentiality

Cardinal's bunches are large, loose with a long and not very lignified peduncle. The berries are very large but irregular in color. The skin is moderately thick and the pulp is firm. This simple-flavored variety displays interesting gustatory qualities. The grapes have moderate storage and a fairly good transport capacity.
Clonal selection in France