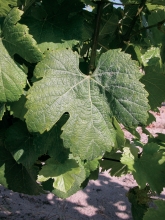 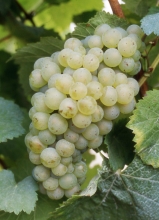 This variety originally comes from the Pyrénées.
Synonyms

In France, Camaralet is officially listed in the "Catalogue of vine varieties" on the A list and classified.
Use

The identification is based on:
- the tip of the young shoot with a high density of prostrate hairs,
- the young leaves with bronze spots,
- the adult leaves with five lobes, deep open U-shaped lateral sinuses with often a tooth inside, an open petiole sinus, no anthocyanin coloration, a flat leaf blade and on the lower side of the leaves, a medium density of erect and prostrate hairs,
- the slightly ellipsoid berries.
Genetic profile

Given the fact this grape variety has female flowers, risks of coulure are very high and the yields extremely limited.
Susceptibility to diseases and pests

Thanks to its very loose bunches, Camaralet is usually verry little sensitive to grey rot, except when it is over-ripe.
Technological potentiality

This variety is renowned for the quality of its very fine wines (alcoholic, honeyed and ample) and their aromatic typicity (cinnamon, pepper, fennel).
Clonal selection in France

The two certified Camaralet clones carry the numbers 1023 and 1024. A conservatory of ten or so clones was planted in the Jurançon wine-growing region (French department of Pyrénées-Atlantiques).
Bibliographic references