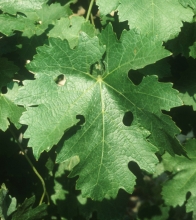 This variety is originally from the Bordeaux region. Based on published genetic studies, this variety would result from the crossbreeding between Cabernet franc and Sauvignon.
Synonyms

In France, Cabernet-Sauvignon is officially listed in the "Catalogue of vine varieties" on the A list and classified. This variety is also listed in the catalogues of other Member States of the European Union: Austria, Bulgaria, Cyprus, Czech Republic, Germany, Greece, Hungary, Italy, Malta, Portugal, Romania, Slovakia, Slovenia and Spain.
Use

The identification is based on:
- the red young leaves with bronze spots,
- the circular adult leaves, with seven or nine lobes, club-shaped or U-shaped lateral sinuses, a petiole sinus with slightly overlapping lobes, sometimes naked petiole veins, medium to large length teeth with convex sides, a blistered leaf blade, and on the lower side of the leaves, a low density of prostrate hairs,
- the round-shaped berries.
Genetic profile

Cabernet-Sauvignon has a late budburst. It is vigorous,with large-diameter vine shoots under fertile conditions, very long branches (elongated internodes) and lignified tendrils. This variety requires careful trellishing. The pruning, which can be long or short in southern areas, is relatively slow. Large pruning wounds should be avoided. The removal of woods, which are hard, also requires considerable time consuming work. Cabernet-Sauvignon frequently produces better results on gravelly and draining ground, rather acid and well-exposed. This variety sometimes suffers from dessication of the stems and this risk is increased by the use of certain rootstocks such as S04.
Susceptibility to diseases and pests

Cabernet-Sauvignon is not very susceptible to grey rot. On the other hand, it is very suceptible to wood diseases (eutypa dieback, esca) and powdery mildew.
Technological potentiality

The bunches and berries are small. Cabernet-Sauvignon makes wines with a very interesting tannic structure and a deep color when it has reached a proper maturity. These wines are generally suitable for ageing and maturing in wood. This variety vegetal aromas are replaced by much more pleasant and complex aromas once the grapes have reached a proper maturity. On the other hand, when vinified alone and not blended, Cabernet-Sauvignon often lacks body and fullness.
Clonal selection in France