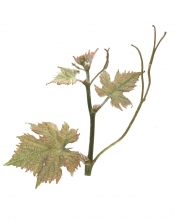 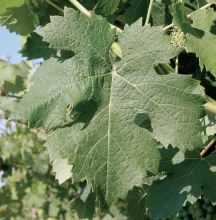 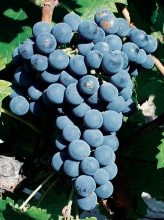 Cabernet franc is probably originally from the south west of France.
Synonyms

In France, Cabernet franc is officially listed in the "Catalogue of vine varieties" on the A list and classified. This variety is also listed in the catalogues of other Member States of the European Union: Austria, Bulgaria, Cyprus, Czech Republic, Germany, Greece, Hungary, Italy, Malta, Netherlands, Portugal, Slovenia and Spain.
Use

The identification is based on:
- the greenish-red young leaves with bronze spots,
- the pentagonal adult leaves, with three or five lobes, lateral sinuses with often a tooth inside, a petiole sinus with slightly overlapping lobes, medium teeth with straight sides, a hammered, shiny leaf blade, and on the lower side of the leaves, a low density of prostrate hairs,
- the round-shaped berries
Genetic profile

This fairly vigorous variety must be trained with moderately long pruning or short pruning in more favorable climatic zones. In terms of terroir, best results are generally achieved on clay-limestone soils, but good results may also be achieved with sandy soils in the absence of water stress.
Susceptibility to diseases and pests

Cabernet franc is moderately resistant to grey rot and is moderately sensitive to eutypa dieback and esca. It is susceptible to vine leafhoppers.
Technological potentiality

The bunches are medium in size and the berries are small. This variety is used to produce quality aromatic wines with average ageing potential. However, the 'sugar', 'acid' and 'polyphenol' (coloring intensity and tannic structure) potentials are moderate.
Clonal selection in France