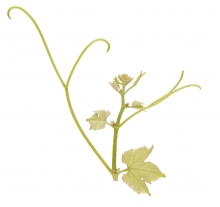 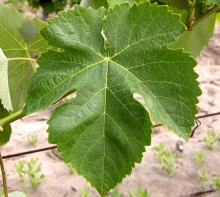 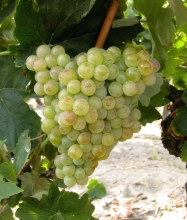 Brustianu is originally from Corsica, probably from the area of Ajaccio.
Synonyms

In France, Brustianu is officially listed in the "Catalogue of vine varieties" since 2020 on the A list and classified.
Use

The identification is based on:
- the white tip of the young shoot with a piping anthocyanin coloration and a high to very high density of prostrate hairs,
- the green or yellow young leaves,
- the shoots with red-striped or slightly red internodes,
- the large adult leaves with three or five involute lobes, a slightly open V-shaped petiole sinus, very small mucronate teeth, medium compared to their width at the base with convex sides, no anthocyanin coloration of veins, a blistered, slightly goffered, flat or a little bit twisted leaf blade, and on the lower side of the leaves, a moderate to high density of erect and prostrate hairs,
- the ellipsoid berries.
Genetic profile

Brustianu is a very productive variety and has a semi-erect bearing.
Susceptibility to diseases and pests

Brustianu is sensitive to powdery mildew and to grey rot.
Technological potentiality

Brustianu's bunches are quite large, compact and winged. The berries are medium to large, simple-flavored, with a thin skin, a lot of bloom and a juicy pulp. This variety produces pale yellow wines, expressive on the nose, with honey, citrus fruits and aniseed. In the mouth, they lack a little liveliness and body.
Clonal selection in France

The only certified Brustianu clone carries the number 1310.

A conservatory of two clones has been planted in Corsica in 2006.