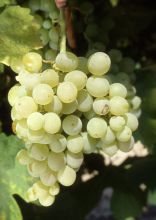 This variety would appear to be originally from Provence.
Synonyms

In France, this variety can officially be called "Doucillon blanc" regarding plant material.
Legal information

The identification is based on:
- the tip of the young shoot with a very high density of prostrate hairs,
- the yellow young leaves with bronze spots,
- the pentagonal adult leaves, with three lobes, a petiole sinus with very overlapping lobes and often with a tooth on the edge, an elongated central lobe, short teeth compared to their width at the base, a blistered, matte leaf blade, wavy between the veins near the petiole sinus, and on the lower side of the leaves, a medium density of erect and prostrate hairs,
- the ellipsoid berries with thick skin.
Genetic profile

This variety is moderately fertile. It must be pruned short and with sufficient training due to its semi-drooping bearing. Bourboulenc is well adapted to drought. Its maturation is slow and it needs to be grown in hot and well exposed areas in order to reach full maturity.
Susceptibility to diseases and pests

The bunches are large and the berries are medium in size. Bourboulenc produces fine wines with low alcohol content and moderately intense in terms of aroma.
Clonal selection in France