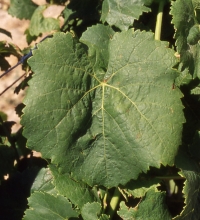 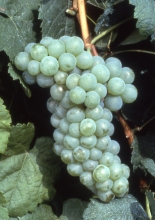 This variety was obtained in Germany in the 19th century. Based on genetic analyses carried out in Montpellier, it would result from the crossbreeding of Sylvaner and Frankenthal.
Synonyms

In France, Bouquettraube is officially listed in the "Catalogue of vine varieties" on the A list and classified.
Use

The identification is based on:
- the tip of the young shoot with a low to medium density of prostrate hairs,
- the yellow young leaves with bronze spots,
- the circular or pentagonal adult leaves, entire or with three lobes, with shallow upper lateral sinuses, a closed petiole sinus, short teeth compared to their width at the base with convex sides, no anthocyanin coloration of veins, a twisted, revolute and goffered leaf blade, folded near the petiole sinus, and on the lower side of the leaves, a low density of erect hairs,
- the round-shaped or obloid berries, with a slightly aromatic flavor.
Genetic profile

This variety is sufficiently fertile. It is generally pruned long and trained.
Susceptibility to diseases and pests