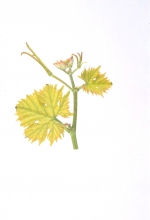 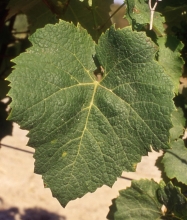 This variety was originally from Gascogne and was developed after the powdery mildew crisis and was identified at the end of the 19th century.
Synonyms

In France, Baroque is officially listed in the "Catalogue of vine varieties" on the A list and classified.
Use

The identification is based on:
- the tip of the young shoot with a very high density of prostrate hairs,
- the yellow young leaves,
- the shoots with red internodes,
- the pentagonal adult leaves, entire or with three or five lobe, a closed petiole sinus, an elongated central lobe, moderate size teeth with straight sides, moderate anthocyanin coloration, clistered leaf blade and on the lower side of the leaves, a medium density of erect and prostrate hairs,
- the round-shaped berries.
Genetic profile

This variety is vigorous and has an erect bearing. It is usually long pruned. Difficulty with maturation may occur under intense drought conditions.
Susceptibility to diseases and pests

Baroque, due to its compact bunches, is very susceptible to grey rot. On the other hand, it resits fairly well to powdery mildew and to black rot.
Technological potentiality

The bunches and berries are medium in size. The quality potential of this variety is intersting and the wines produced are rather fine, lively and fruity.
Clonal selection in France

The four certified Baroque clones carry the numbers 351, 390, 391 and 392. A conservatory of 60 or so clones was planted in 2007 in the Landes region.
Bibliographic references