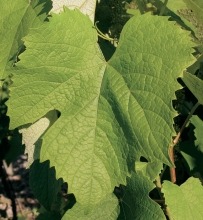 In France, this variety can officially be called "Baco 22 A" regarding propagation plant material.
Legal information

In France, Baco blanc is officially listed in the "Catalogue of vine varieties" on the A list and classified.
Use

The identification is based on:
- the tip of the young shoot with a high density of prostrate hairs,
- the yellow young leaves,
- the shoots with an absence of anthocyanin coloration and with 2 or less consecutive tendrils,
- the large, circular or wedge-shaped adult leaves, entire or with three or five lobes, with deep U-shaped lateral sinuses, an open V or U-shaped petiole sinus, short teeth compared to their width at the base with straight sides, no anthocyanin coloration of veins, a moderately or heavily blistered leaf blade, and on the lower side of the leaves, a high density of prostrate hairs of the blade and none or in a very low density on the veins,
- the round-shaped berries, with a soft pulp and a slightly foxy flavor.
Genetic profile

Baco blanc is moderately to strongly vigorous and has a semi-erect bearing. It is sensitive to chlorosis.
Susceptibility to diseases and pests

Baco blanc is sensitive to phylloxera, flavescence dorée, powdery mildew, downy mildew on the leaves and to mites. On the other hand, it is not very susceptible to grey rot.
Technological potentiality

The only certified Baco blanc clone carries the number 1086. A conservatory of twenty or so clones was planted in the French department of Landes in 2006.
Bibliographic references