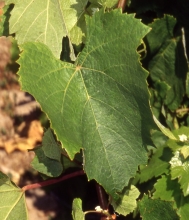 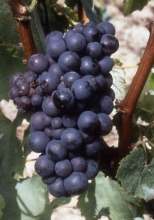 This variety is originally from the north east of France (Aube) and based on published genetic analyses it would result from the crossbreeding of Gouais blanc and Pinot.
Synonyms

In France, Bachet is officially listed in the "Catalogue of vine varieties" on the A list and classified.
Use

The identification is based on:
- the tip of the young shoot with a very high density of prostrate hairs,
- the shoots with red striped internodes,
- the entire adult leaves, with an open V or U-shaped petiole sinus, medium teeth with straight sides, a moderate anthocyanin coloration of veins, an involute, sometimes slightly revolute on the edges and finely blistered leaf blade, and on the lower side of the leaves, a low to medium density of prostrate hairs,
- ellipsoid berries.
Genetic profile

Bud burst: 3 days before Chasselas.
Grape maturity: early-season, 1 week to 1 week and a half after Chasselas.
Suitability for cultivation and agronomic production

This variety has good vigor and is fairly productive. It appears to resist well against winter frosts. On the other hand, it is sensitive to chlorosis, drought and root asphyxia.
Susceptibility to diseases and pests