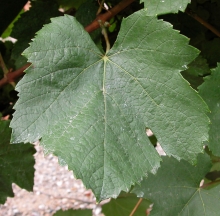 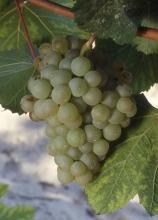 Based on published genetic analyses, this variety would be the result of the crossbreeding of Pinot and Gouais blanc. Its development was encouraged by the Laquenexy (Moselle) research station. After 1950, the Station de Recherches Viticoles et Oenologiques de Colmar (The Colmar Viticulture and Oenology Research Station) strongly developed this variety in Alsace vineyards.
Synonyms

In France, Auxerrois is officially listed in the "Catalogue of vine varieties" on the A list and classified. This variety is also listed in the catalogues of other Member States of the European Union: Belgium, Czech Republic, Germany, Luxembourg and Netherlands.
Use

The identification is based on:
- the green or yellow young leaves,
- the adult leaves with three lobes, an open V-shaped petiole sinus, short teeth compared to their width with straight sides, low to medium anthocyanin coloration of veins, a blistered, involute leaf blade, and on the lower side of the leaves, a low density of erect hairs,
- the round-shaped berries.
Genetic profile

This variety is well suited to northern areas and to limestone terroirs. Auxerrois is moderately vigorous and has low fertility when pruned short.
Susceptibility to diseases and pests

Auxerrois's bunches and berries are small. The wines produced are quite fine, slightly aromatic and not very acidic.
Clonal selection in France

The two certified Auxerrois clones carry the numbers 56 and 57. A conservatory of more than 200 clones was planted in Alsace in 2007.
Bibliographic references